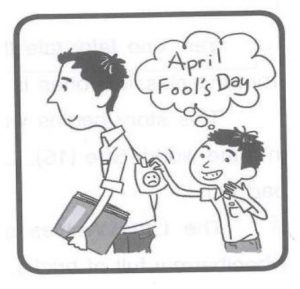 Everyone turned their heads unanimously and stared at Mr Kim. Everyone was trying to stifle their giggles but soon could not hold it in. The whole canteen roared with laughter. Mr Kim did not know anything and was surprised by what was so amusing…

Mr Kim was a draconian teacher. He keeps on picking on impish and mischievous students, like me. Thus, on this April Fool’s Day, I decided to play a small prank on him.

It was a fine morning when this incident happened. I scribbled the word “Hit Me” on a small piece of paper and pasted some double-sided tapes to the top of the paper. When the lesson was over, I spotted Mr Kim carry his books in his arms and headed out of the classroom.

I sneaked up on Mr Kim and tiptoed quietly. Once I was close enough, I carefully pasted the piece of paper on his back and tiptoed back to class. Everyone stared at me blankly as they wondered what I had up my sleeves. I plastered a smirk on my face and returned to my respective desk.

Soon, it was time for recess and the whole class made a mad dash to the canteen. I searched the canteen for Mr Kim and found him sitting at a corner, eating a bowl of noodles. There was a group of girls sitting behind me, and they were giggling hysterically. I grinned impishly at the thought of my plan succeeding. Mr Kim was clueless of what was going on.

“Hi Mr Kim,” Mrs Tan greeted and continued walking. I thought she was going to walk past Mr Kim but she noticed the note and gave Mr Kim a hit on the head! Mr Kim spun around immediately.

“Mrs Tan, what did I do to deserve a hit on the head?” Mr Kim cried out in disbelief with a hand rubbing his sore area that Mrs Tan had hit on.

“When?” Mr Kim asked puzzledly , scratching his head and ruffling his hair.

Mrs Tan grabbed the note from Mr Kim’s back and held it in front of his face. Mr Kim was aghast to see that there had been a prank note on his back all along. Just then, I could not hold my laughter anymore. I burst into peals of laughter and everyone stared at me, knowing who the culprit was.

Suddenly, I realized that I had laughed too loudly and everyone realized that I was the culprit. With arms akimbo, Mrs Tan stormed towards me and lashed a tirade at me. I felt guilty and full of regret for pasting the note on Mr Kim’s back. I apologized to Mr Kim profusely. He forgave me and told me not to repeat that impish act ever again. I promised him and learnt a lesson that day: never ever play pranks on people unless you want them to do the same thing to you.